Every Trading Day Only A Fraction Of Stocks Will Move With Range AND Volume.

When day trading stocks, you’re on the lookout for stocks that can move with enough range and volume to be worth your precious time. You might have a watch list from the night before or early morning but things can turn on a dime at the open and what was looking like a worth while watch suddenly is not.

With THOUSANDS Of Stocks To Choose From, Finding Ones To Consider Trading Can Get Overwhelming Fast.

The Stock Horizon System Finds Stocks That Can Move With Range AND Volume.

Scanning the market, our 100% automated with zero human intervention system looks for stocks that are showing signs of range and volume potential. It filters for ones hitting specific criteria as well as showing social interest. It looks for stocks that show multiple signs others are watching because stocks only move well when there is a large pool of traders interested.

It doesn’t stop there. Each of our tools provides additional information to help you decide which trades are worth your investigation:

The Stock Horizon System Does More.

Stock alerts that could move with good range intraday, key price points are included to let you know where it’s anticipated to “take off” and where it could potentially move to if it does.

Working for you 24/7, our unique monitor tool finds and ranks stocks other traders are interested in. Let our system do the hard work of finding active stocks for you.

Our 100% automated services help you navigate the market, providing actionable and unbiased trading opportunities all day to help you solve the problem of finding the best stocks to trade.

The Stock Horizon System Does Not Tell You Where To Buy And Sell.

The idea of being told where to trade or even using a system that trades for you is quite appealing. On the surface it says you don’t have to do the hard work, it will be done for you. But is it that easy? If it was, the majority of traders would be rich; however, the truth is most fail at trading. There are many reasons why but the thing to remember, as obvious as it is, being ahead of market moves greatly increases your chances of success, not following behind.

Following a Trading Guru is making me the same and putting me ahead of the market, right?

With the right trader it certainly can, and there are some good ones out there. To truly trade like them you need very similar emotional control, discipline, trading style, and capital. But you also need to trade as they do which is often not the case. They are limited to telling followers what THEY are doing, which leaves them with a dilemma: Tell followers before they trade and COMPETE for shares, OR tell followers after they trade which creates a frenzy for their followers often driving price resulting at a loss to most.

Our alerts tell you prices IN ADVANCE that if shares trade at, stocks have a good chance of moving 3%+.

How good? 85% of our alerts this year have done that with an average move of 13.4%. Whether to initiate a trade before, at, or after those prices and when to close is your call based on your comfort and trading style. As it should be.

Our Day Trade Performance Report Is Updated Every Trading Day!

What Is The Focus Of This Report?

The goal is to show you how our service performs picking stocks that can move 3%+ INTRADAY beyond alerted prices. Average moves are SIGNIFICANTLY higher!

How Is This Different?

This Is Not A Win / Loss Report.

Such reports do not represent how you will do. We are an alert service designed to be traded how you see fit. How alerts moved is what you need to determine if a service is of value to you. 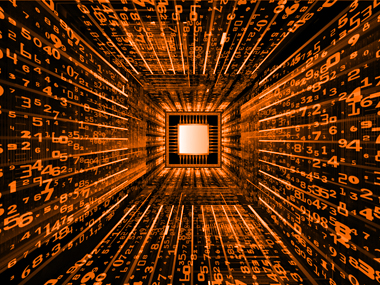 Designed with the active trader in mind and powered by proprietary algorithms, our services offer you 100% automated and unbiased trade alerts. 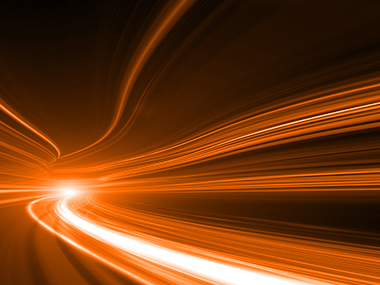 Our services’ powerful and advanced algorithms simplify the complicated. We present alerts in an easy to understand format with minimal learning curve. 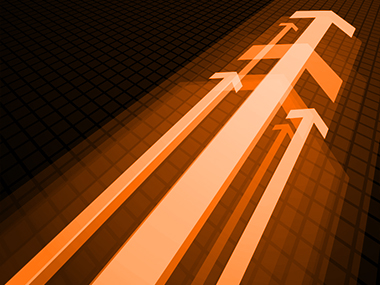 Years of programming and extensive back testing brings a system that hits it’s target over 80% of the time, moving the odds into your favor and allowing you to profit.

Trading Starts . . . The Night Before.

Scanning charts is a great way to find stocks for a watch list, but which ones? You don't want to waste time tomorrow watching stocks with great chart patterns that don't move. Any stock can move, but the more traders interested the better chance they have to move well. Get an idea of how popular a stock could be tomorrow by use Sonar to gauge what stocks are socially active. Then chart and research making a watch list of the ones you like in preparation for tomorrow. 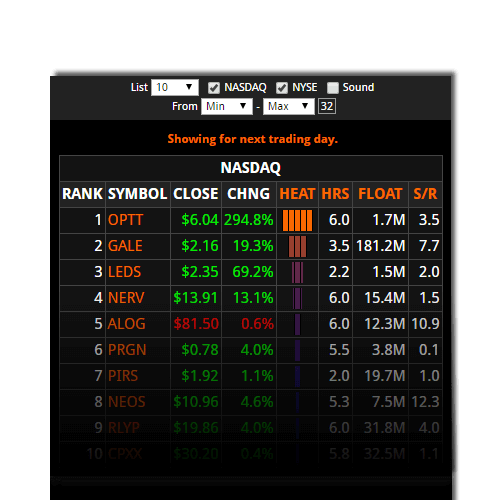 Being prepared the night before is important but everything can change in a moments notice. It's morning and our system is scanning the market for active stocks that can be good day trades. As early as 4am Gazer's Top Watch is presenting the ones the system most likely will alert during market hours. Some you may have found of interest the night before, research others and prepare. If you find ones you really like, trade ahead of alerts as you see fit! 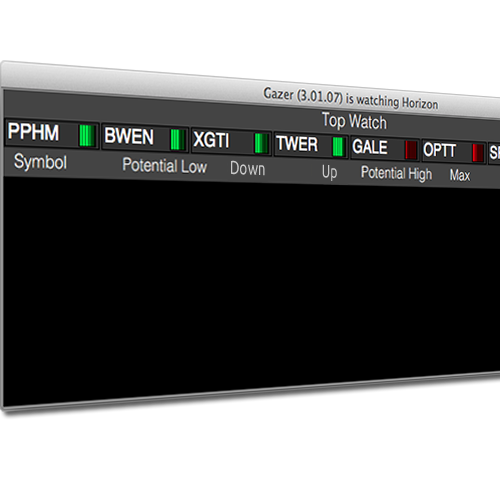 9:30am, the market opens and stocks are moving fast! Though the trading day is six and a half hours long, most activity happens in the first hour and a half. Between 9:32am and 10:00am, Gazer will present symbols our system feels can move 3% beyond key "trigger" prices alerted and be good candidates for day trading. On average, there will be 8-10 alerts each day. Key information to consider is presented but do research as you see fit. Remember, the early market time can move so research quickly! 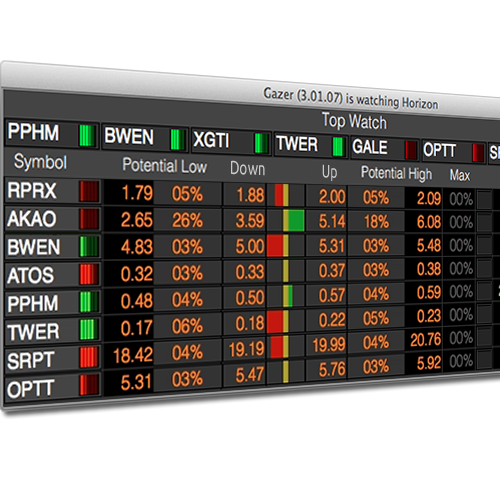 Alerted stocks have prices (Short/Long Trigger prices) that when traded, a 3%+ move beyond is predicted. These prices are $.01 outside the stock's opening range. The idea is trading outside this range can cause a stock to take off. The ability to trade before, after, or at these prices will vary from stock to stock and trader to trader. The "hotter" the stock, the faster and harder it will be to trade at those prices, so consider trading earlier or waiting for pull backs after they move. In addition, the system shows potential prices trading could reach. Consider these resistance as price approaches and support should price pass providing additional breakout trading opportunities. 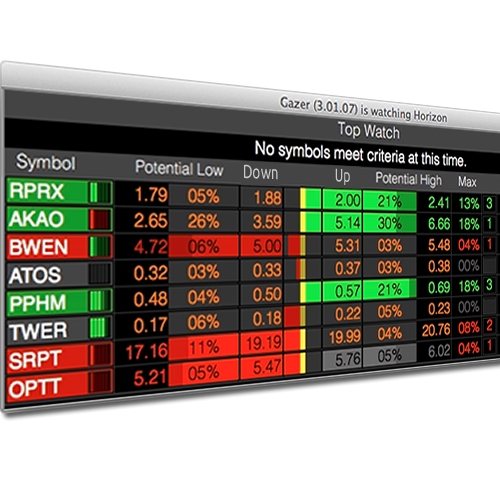 Most likely you have finished your trading day or are busy enough trading and re-trading the stocks alerted within Gazer. You may even be in trades you liked from the research you did the night before / pre-market that never alerted. If that is not enough, use Sonar intraday to keep track of what stocks are hot and which are gaining interest. 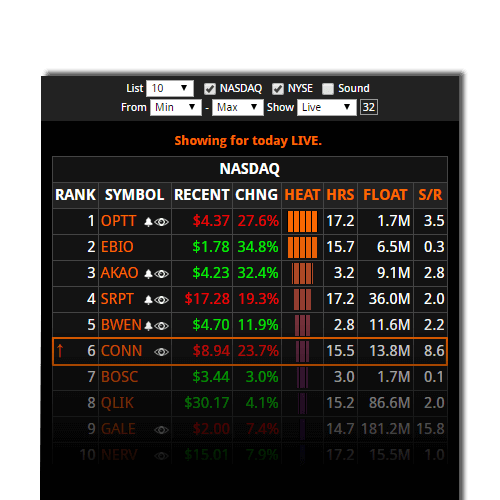 You guys changed my life I just wanted to say thank you on providing the best stock alert service that I tried and I tired alot but yours is the best so thank you again for creating this and also for making it reasonably priced. please never go away.

I have been trading since 1998 and this is the first testimonial that I have written....Came across Stock Horizon when they first put out their beta test version of Gazer...I traded the alerts and was impressed with the performance. When the test was over I was excited to become a subscriber.

I bought 2.5k shares and sold for a profit of $600, not bad for one trade. This amount will be sufficient for my first year subscription. Once again thanks for all the help from your side.

In the current market environment I'm very impressed and pleased with the success percentage and the very small loss of 1 out of 11 trades, this is an average I have not previously been able to achieve.

Stock Horizon has truly exceptional customer service. They go above and beyond to help you with anything you need in order to be successful.

I just purchased Stock Horizon this weekend and I'm loving it already. Populating my screen before the market open with plays for today, and once the market closes Sonar was still providing ideas for the next trading day. Very impressive, and highly recommended!

Thank you to the guys at Stock Horizon - great customer service, I'm finding stocks on the move and at a great price, very highly recommended!

Subscribing to Stock Horizon has changed my account. Two days in and nothing but profits! Thank you so much!

GREAT SERVICE, you have me until the Angel of Death taps me on the shoulder!

Great Service has paid for itself several times over.

See What You Can Do.

Start using the Stock Horizon System today and see what a difference it can make!